Case Study: Active at any Age!

This entry was posted on 24th September 2021 by Kerensa Preedy-Houston. 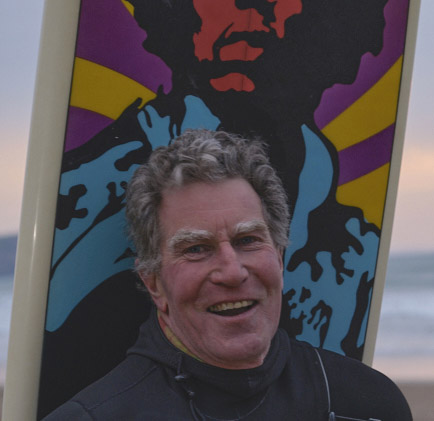 As we get older, we tend to stop being as active. This may be for a number of reasons but the most popular one is likely to be that our joints become ‘creaky’ and being active just isn’t fun anymore. It becomes an effort, and in some cases, a very painful effort.

However, this doesn’t have to be the case as our 70-year-old surfer can prove! Eric is a true pioneer of living and maintaining an active lifestyle no matter how old you are and having been surfing for well over 50 years he only retired from competing in recent years. As well as his love of surfing he can also be found skiing, snowboarding, and climbing the odd mountain or two.

So, what keeps Eric riding the waves? This constant crusade for such an active lifestyle will put a strain on your joints and bones and Eric is the first to admit that he has become “creaky” over the last 10 years. However, stopping is not an option for a chap such as Eric and he is determined to carry on with the active lifestyle he so enjoys. One of the key factors for Eric was his discovery of Glucosamine and other supplements, such as turmeric to keep him active and able to continue all the sports he loves.  He now refers to Glucosamine as his WD-40 for joints, he acknowledges that without it, he would have had to retire from the sports he loves so much.

Glucosamine is probably one of the most widely taken supplements in the UK and is very common with folks who enjoy an active lifestyle. Glucosamine naturally occurs in the body where it is found in particularly high amounts in joint tissue. However, most foods contain very little Glucosamine so it's vital to top up your levels in your body by other methods, especially if you want to keep active.

In addition to glucosamine, Turmeric is also a great supplement to keep your joints as healthy as possible and to help reduce any aches and pains that may come with aging. With its anti-inflammatory and antioxidant properties, turmeric has proven to be a great ally in the fight against creaky and painful joints.

This entry was posted in Joints & Bones, General Wellbeing on 24th September 2021 by Kerensa Preedy-Houston. ← Previous Post Next Post →