Something we have hoped for all our lives! 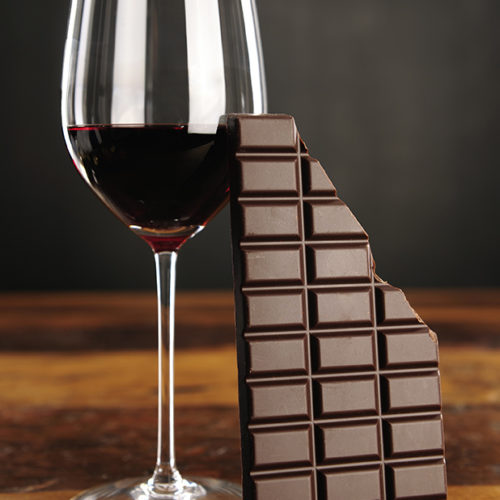 Scientists have come to the conclusion that a limited amount of dark chocolate and red wine consumed together may actually be good for the brain, enhancing its capacities of resolving complex matters.

Recent studies led by a research team of experts at Northumbria University Medical School in North East of England. The starting theory was that polyphenols affect the brain's capacity to function. And they wanted to check if it was true and how it happens. So they gathered a group of volunteers of different ages and intelligence state. They asked every participant to take a supplement of polyphenols found in wine and then they gave them a series of tests. In addition they did brain scans to all volunteers in order to see if there was any change at a neural level.

What they found out confirmed their suspicion: there is a connection between the level of polyphenols in the brain and the brain's activity. Polyphenols increased the brain activity, pumping more blood into the vessels. This is how they work actually. They relax the blood vessels, making them wider and thus increasing their capacity. This way, blood runs faster through the veins and gets faster to the brain, as well. The relaxing of the vessels inside the brain not only increases the amount of blood in the head, by also the amount of oxygen and other nutrients, which are highly important to the brain.

Polyphenols can be taken as supplements, but they can also be found in some foods, among which there are the dark chocolate and the red wine. They work well separately, but work even better when tasted together. Scientists warn, however, that a small quantity was all it took and that this shouldn't be used as an excuse to over do it. (there's always one isn't there)
The studies have shown that polyphenol consumption does not increase intelligence in young people as they seem to have the brain already working at full capacity. (Every parent knows that teenagers are already smarter than everyone else) However, polyphenols helped widening their blood vessels in the brain, too. Instead, there have been differences registered in older people who seem to benefit more from eating chocolate and drinking wine.

This entry was posted in Mind and Memory on 2nd August 2019 by ux3media. ← Previous Post Next Post →